Bands To Know: Sworn In 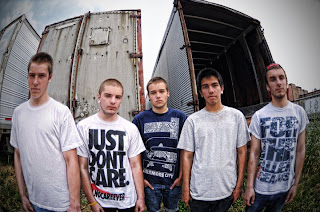 Time flies by when you're a admin of an extreme metal blog. Weekly segments on the site just go by, that's why I have to find out about great bands as soon as possible. Fortunately, these guys seemed to just appear out of nowhere, making me literally not have to think about who is going to be this weeks Band To Know, because these dudes are awesome.


The band has been around since March of 2011 and has released one EP and one Single.


If you are a fan of bands like The Acacia Strain, Misery Signals, and Stray From the Path, give these guys a listen. If you don't, listen anyways.

Here are a few links to get you all started on your love for Sworn In.
Sworn In on Myspace
http://myspace.com/sworninil


Sworn In on Tumblr
http://sworninband.tumblr.com


I hope you all dig this band as much as I do. If you have any recommendations for next weeks Band To Know or are a band wanting to be featured on Bands To Know, please e-mail me at davidmetalinruins[at]gmail.com


-David
Posted by davidmetalinruins at 10:09 AM

Email ThisBlogThis!Share to TwitterShare to FacebookShare to Pinterest
Labels: Bands To Know, Sworn In