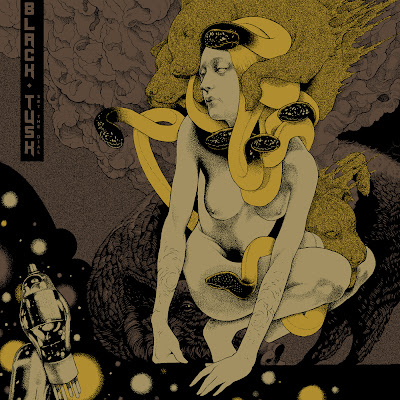 Relapse is just on a roll with the releases they've been coming out with this year. So far this is one of my favorites they have released for 2011. The album opens up with a bit of a sketchy intro that leads to this catchy instrumental opening to the album, to me it honestly sounds kinda.... funky! The track is just this instant blood rusher that is making me anticipate the next song, which hits not too long after. The next track is called "Bring Me Darkness" and is definitely a hell of a track. It opens up with three, simple words. "Six... Six... Six.." repeated a few times. It also has this killer bass riff to fill my interest. The song is definitely reminiscent of previous Black Tusk songs, only BETTER. Next up comes this Mastodon meets Red Fang jam called "Ender of All" The song sounds a bit different, but is definitely one of my favorite songs on the album. It has a few nice hard-rock riffs and killer lyrics, but I can also notice a lot more of a hardcore influence in the song that most of the other tracks. 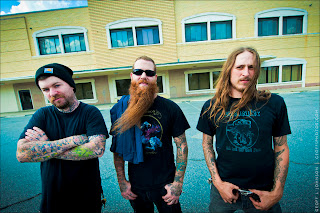 Track Four on the album is "Mass Devotion", a bit more of a weirder side on the album. The song chills out a little in the beginning, and kicks into a full cut raw piece of fucking meaty ass tunage! This album is just getting better and better. The song definitely shows a different personality portrayed a lot in the album. Next up, "Carved in Stone" an instant kick in the nuts from this pure fucking music. A lot of catchy riffs used in this song. The song seems as if it involves religious state. The next song is the Title Track of the album (kinda. I mean, it's longer. But it's it.) "Set the Dial To Your Doom", A crushing instant threat to your ears. I literally broke into movement and could not refrain from head banging to this song. I definitely see why the album got this name. The album completely passes my expectations immediately at the wake of this track. Just as I thought the album could not possible get any better, the instrumental jam of the album "Resistor" kicks in. With a nice, soft little opening, only to be over ruled by the catchy stomach curling riffs that can easily get stuck in your head. Soon, the end of the song comes, and yet again the soft, melodies of an acoustic guitar (like the one heard in the beginning of the song) occupy me, yet making me wonder what bit of heaviness is about to stomp on my skull.Soon, I wonder no more, as Track Eight, "This Time is Divine" heads in. The song sounds like a more Mastodon meets more Sludge. The next song "Growing Horns" sounds like Bring Me Darkness' fucked up cousin who just made a deal with the devil. Definitely one of my favorite tracks on the album, until the final song on the album, Track Ten, "Crossroads of Thunder" comes along. A full blown southern sounding hardcore sludgy killer that definitely closes an excellent album well. 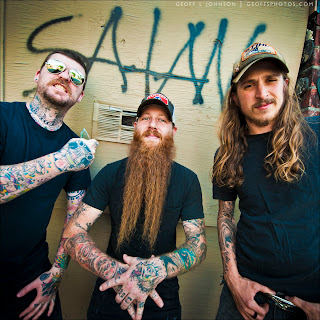 OVER ALL: Black Tusk's Set the Dial is a Murderous, Crushing work of art. A Masterpiece to be released by one of the best bands in the southern states now. The album is definitely added to the list of my favorites. It has excellent sound, crunchy guitars, and fucked up vocals. And let's not forget the spine shattering Bass that emphasizes the sound on the album!

Metal in Fuckin' Ruins rates this tasty jam a Ten out of Ten stars! For being Heavy, Perfect, and Diverse. The album does not cut out a single instrument and is one of the most peculiar and intense albums of the year! Definitely go to your local record store and buy this when it's released!
This album's release date is set for October 25, 2011. And you can pre order the album at the Relapse Records Official Website!

Until next time friends,
Have a Metal-ass day!


-DZ
Posted by davidmetalinruins at 8:18 AM

Email ThisBlogThis!Share to TwitterShare to FacebookShare to Pinterest
Labels: Black Tusk, review, September 2011, without further or DUE: Album Reviews