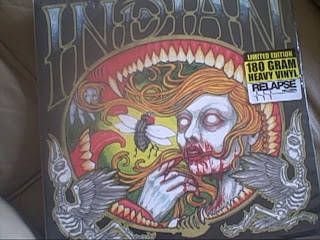 On April 12th, those Doomy-ass dudes INDIAN released their new album "Guitless". On April 15th, this Doomy-ass dudes- liking dude bought it on Limited Edition Vinyl at Inherent Records in Cleveland, TN (thanks to Logan Chitwood for loaning this poor little man the cash to buy it. Your welcome for paying you the next day).This is an album I've been dying to review, and wow. All I can actually say is wow. 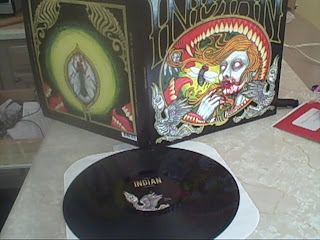 The album opens up with the instant face crusher No Grace, that, like expected, turns into a doomy, grinding, destructive killer. It begins with a decent paced intro and verse, till' it just pulls down to the slow, catchy doom riffs I love INDIAN for. As the song shifts to a rhythmic outtro, it has a somewhat sketchy riff playing untill the song fades, beginning track two. Track two is The Fate Before The Fate, which opens up as a beautiful masterpiece that just spreads the atmosphere of the song around you. 4:53 minutes pass, and we hit the title track, GUILTLESS. with the instantly crushing piece of action, it opens up where it should have. It has straight-forward heavy riffs and lots of slow doom for you kiddies to enjoy.  You can just feel the anger in the song pierce your ears and slash ten-thousand chains across your instantly morbid looking face. It's quite the miasma, my friends. 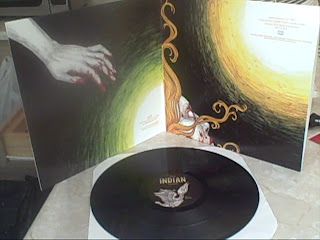 We hit the next track, Guilty (what a twist!) as it opens up with a strange screetchy sound and hits the malignant vocals of Dylan O' Toole and Will Lindsay.  As you hear them scream "Guilty" and "Guiltless" over and over again, you just have a sinking feeling, like your getting sucked into an abysall of the anguished song. It holds enough power for those who really get into the music (and for those who really get into the amphetamines. Ha!). The next song, The End of Truth, begins as you hear a distorted whisper sweeping through your ears, as the intro gets near, and attacks you like an untamed beast craving your tender flesh. With more powerful vocals, intense atmosphere, catchy riffs, and drums your little chopstick- box hitting friends would just love to air-drum to, INDIAN once again rips apart my face in this song. We hit track six, Supplicants, which starts off as a beautiful disaster of acoustic melody, distorted withering sounds in the background, and an intense feeling to leave you with along the way of it's departure. The album closes with the 9 minute doomsterpiece, Banality, which, needless to say, builds up the whole album's benefits and multiplies them by an infinite supply of numbers.  You literally cannot do nothing but listen once you reach the song.  It's just amazing, overall. It leaves you with echoes of screams and slowed riffs, which give you the sense of an apparition creeping up on you and slithering up your back.
To conclude this. The album is overall something I can definitely listen to every day, leaving me with a piece of the album I find new everytime I listen.

Metal in Ruins rates the album a 9 out of 10 stars
Posted by davidmetalinruins at 11:17 AM

Email ThisBlogThis!Share to TwitterShare to FacebookShare to Pinterest
Labels: Guiltless, INDIAN, review, without further or DUE: Album Reviews