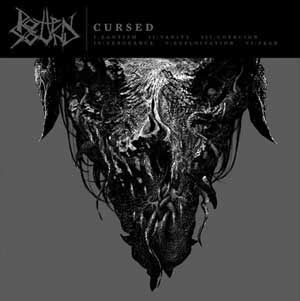 So in addition to posting release dates of albums to come, MiR has given you all the opportunity to read the opinion of  a 14 year old boy who knows nothing. Heres the first album review we have to offer on here for
Rotten Sounds CURSED:

Cursed is Crazy. Period.
It opens with the 59 second track Alone, which is just a "no time to take the time, no time to get right through it but time to just go" track (yes, very confusing) as it jumps right to Superior, the Grind level goes to an extreme that makes your crotch burn from Pyro-Crabs that makes you want to say "I should have worn ear condoms".
So like 6-7 minutes have passed, and your listening to the 5th track "Hollow" which is like the anthem of symbolism. It contains lyrics like "The crust that holds your innards is what you lean on. Intestines inside are as hollow as the crust is thin" and  "You keep yourselves busy By serving your masters, Slaves of society, Ignoring reality."
The song makes you want to think "Fuck the Industry! We're all fucking slaves to the sick world of stringed puppets run by a cruel society!" yeah... what a great feeling...

We move to track 10, "Plan" the follow up of the power-grind song "Power" (how powerful) the song has some sick moments, including some slowed down tempos (who doesnt love those???) and some hard-ass riffing! the album gets even more sick when we reach about the 1:10 mark on the song "Declare, as the song just gets plain fucking doomy, and the vocals get evil as satan meeting with charles manson and anton lavey for satanic cupcakes and tea. the album calls quits and ends at track 16 "Doomed", which makes basically a hell of an ending. As the song crushes your skull with a spoon and ripps your pretty lover-boy face inside out and covers it in piss (you know you love it)
MiR rates this album a
8 out of 10 stars!

got an album you want us to review? Reccomend it to davidwantsataco@yahoo.com!
Posted by davidmetalinruins at 1:31 AM

Email ThisBlogThis!Share to TwitterShare to FacebookShare to Pinterest
Labels: without further or DUE: Album Reviews