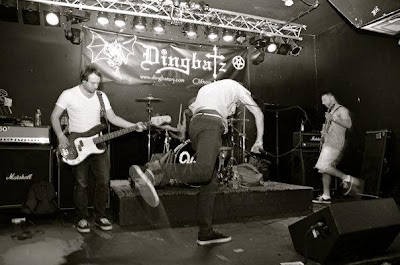 I like hardcore/punk alot, and we all know how rare it is to find a good one these days...(seriously. what the hell is up with that Post-Hardcore bullshit?) There are a few bands that bring back that good old Punk sound back to the modern times, and Ninetly Six is one of them. I got to have a spiffy little interview with their guitarist Pat DeFrancisci. Read it up!

Metal in Ruins:  Before I start this interview I just want to say thanks for doing this interview! Your band really kicks punk-ass ! How are you? How has reception from the recent release of "Dogs of the Day" been?
Patrick: Hey man doing good, reception has been great we threw it up on our bandcamp for free once it was all done getting mixed and mastered and whatnot and alot of people have been downloading/streaming it through there, we've been more than happy with the response MIR: What is 96 currently up to?

P: right now we are writing for a new full length we're hoping to have written by around february with a release around spring time other than that we're just gearing up for our show with Cro-Mags and Suburban Scum on the 27th and trying to book any show people will put us on in the meantime MIR:Tell me a little about the band. How did it form? What made you guys play the genre and style you portray in your music?  P: Well we are a 5 piece band from Essex County New Jersey story of how we formed is me (Pat) Corey (vocals) and Marc(guitar) went to go see Terror, Foundation and Gravemaker at Dingbatz (one of our favorite places to play now) and after the show Corey came up to me and marc and said " I want to start a hardcore band called 96, you down?" obviously the answer was yes and now a little over a year later here we are. We've always been into hardcore and we felt that true hardcore punk bands were becoming too few and far between in our area so we felt it was the best way for us to go being its peaked our interest for so long.  MIR: What do you guys write about when you create your music? What is the base of all the lyrics?
P: Most the time me and marc bounce ideas off each other until we find that perfect medium between both our styles to fit into what we're going for as for the lyrics Corey is very creative whether he is writing about something that has happened in his personal life such as "Home Sick" or making up a character and building a story around him like our song "Lone Wolf" so it really varies from song to song there is no real common theme between all the songs which i think makes them unique


MIR: Are there any bands you guys have been getting into lately?
P: We just played with these two bands from Tacoma they were called Power and Wreck who were super nice dudes and killed it when they went on other than them Cruel Hand has always been a favorite of ours as well as Rotting Out whose new record has been spinning in all our cars for at least the past month and Backtrack those dudes have always ruled
MIR: How do you feel about the current hardcore music scene this nation has built? What do you expect of it in the future? 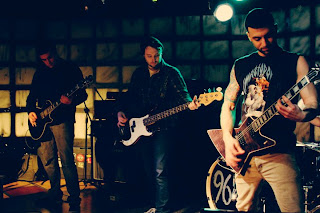 MIR: Speaking of the future, what plans do you guys have in store for the future of the band?
P: Like i was saying before we're just trying to book any show possible while we write for this new full length we're trying to put out by the spring
MIR: well, thanks for taking the time to do this quick interview. Is there anything you need to say before we go?

P: Support your local music scene hardcore, metal, punk whatever it is support it because if you don't all the good music is going to be washed out by the polished, mainstream bullshit radio and big labels try and shove down your throat, support your underground scene and make sure the people who really care about the music have the opportunities to keep doing just that care about the music...

If you want some rad music from these guys, visit their official bandcamp

Until next time guys! Thanks for reading!


-MIR
Posted by davidmetalinruins at 9:47 AM